Where do you need Non Explosive Demolition?

(Rated 4.95 by our Customers for Non Explosive Demolition)
Suburb/Postcode

"Vince and his team did an awesome job helping us to fill and compact our block after a demolition. We were impressed by the speed and professionalism ..."

"Mitch has worked on our block preparing it for a new build as well as our retaining wall. Mitch has an eye for detail and is super efficient. Would de..."

"Excellent result. Beyond our expectations. Ausdig excavated over 1500 tonne of dirt, vegetation and a shed from our back yard. Audig converted an u..."

A non-explosive demolition agent is a chemical used as an alternative to conventional explosives or gas pressure blasting products during demolition, mining and quarrying. Normally, its active ingredient is calcium oxide "burnt lime" that is mixed with some Portland cement and possibly other modifiers.

The use of non-explosive demolition agents begins by drilling holes into the base of the rock, just like drilling holes when using conventional explosives. The slurry mixture of the agent plus water is then poured into the drill holes. This slurry mixture will expand over the next few hours. The rocks will crack as a result and in a pattern similar to the cracks that would occur when using conventional explosives.

Although in some cases, the conventional explosive is preferred and more economical, here are some advantages of non-explosive demolition:

Below are three methods you can use to break a rock easily without resorting to conventional explosives.

There are many non-explosive demolition powders available in the market, all varying in prices. For instance, ECOBUST, a rock and concrete breaker product from Neoferma Australia, costs around $80.00 for 20kg. Each product and its installation can greatly vary in price depending on the project size.
Chemical cracking is the process of complex organic molecules being broken down into simpler molecules by breaking the carbon to carbon bonds in the precursors. For instance, breaking down long-chain hydrocarbons into light hydrocarbons. The speed of chem cracking is usually dependent on the temperature and the involvement of catalysts. Typically, it is a process that will require high temperatures.
iseekplant has a nationwide network of quality non-explosive demolition companies operating in all Australian capital cities from Brisbane to Sydney, Canberra, Melbourne to Darwin, Perth and Adelaide. We also offer chemical cracking hire solutions in all major towns and cities from Cairns down to Mackay, Toowoomba, Gold Coast and Newcastle then across the country to Bunbury and Mandurah.
Ready to try out non-explosive demolition rather than the conventional explosives? Then use iseekplant's get a quote tool so you can easily book a non-explosive demolition contractor in your area. You may also give us a call on 1300 691 912 or email at projects@iseekplant.com.au to find the right supplier for your project. 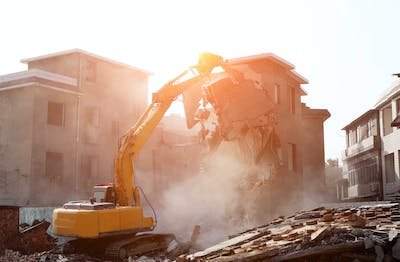 When you hear the term "demolition", what's the first thing that comes t...