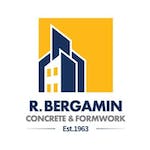 It was in 1953 that Rino Bergamin emigrated to Australia to start a new life in an unfamiliar city. As a young man he immediately commenced working in the concrete paving business and in 1963 he established R. Bergamin Paving in Melbourne. The business originally involved concrete paving, but it was not long before it began to expand into commercial concrete formwork. By the 1970's Rino was expanding his services into several key building projects in a growing Melbourne.

By providing a superior level of expertise and service, Rino won the trust of his customers and established a loyal base of business partners. In the late 1970s, his son Rossano Bergamin joined the family company. And in 1984 his daughter Sandra joined the business. The same key elements of running a successful business - service, expertise and trust have been passed down to this next generation. And the customer base remains as loyal as ever.